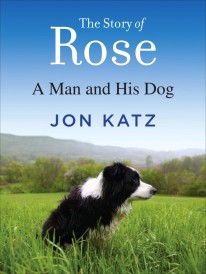 It’s my last night high up in the Smoky Mountain. 12:10 AM. Jon Katz’s new E-book <Rose: A Man and His Dog> has just been released and I am purchasing the newest book on the globe. I am sitting in the sunroom which has been my favorite room for the past few days as it has soundproof glass door. Although there is no Sun to be enjoyed in this sunroom, even in the midnight, I am in my favorite room with the soundproof insulation tightly shut blocking out the silence coming from inside the house. This time, it’s blocking out the big noise my heart was making.

As my Nook is downloading the book, I think, how perfectly timed. Mr. Katz started his journey in the mountains-He was a city dwelling journalist until he moved to the mountains to write about animals, and farm life.- and here I am buying his most triumphant book about Rose, the fruit of his labor, on top of the mountain, the Great Smoky Mountain.

Rose is a remarkable dog. She is a Border Collie, a working sheepdog bred to herd sheep. While she was still in her puppy stage, she won a first-place ribbon for AKC Beginner Trial. “She moved six sheep around a circular ring two times, and then brought them back to me and lay down.”, Mr. Katz notes in his new book Rose. Rose turned out to be somewhat workaholic, always ready for work. She seemed only interested in working, and nothing else. She did not desire human contacts much. When she was not working, she would go into an empty room and stare out the window stoically.

She’s vigilant, charismatic. She’s almost divine. She embodied the perfection a dog can ever dream of. She was Mr. Katz’s most admired dog by his readers. She was impressive even to those who have never met her. Even her death resembles her life. So unexpected, so sudden, and so silent yet out loud. Intense.

She was the calm dog yet a fighter. She was so focused in the moment yet had the whole thing planned out in her masterful herding game. She saw everything, and nothing. And by being nothing, she became everything. She is a Star. To Mr. Katz and to us, his readers. She inspired many hearts.

I will be honest. Until not long ago, I’ve dreamed of becoming a country writer like Mr.Katz. I wanted to dwell in the high mountains, and raise dogs, write about the farm life, and read all the time by the fireplace. It was a very recent event when that long-time dream born out of greed and envy from my human mind disappeared into the clouds of God to be washed away.

I got back down to the lower ground from the Smoky Mountain and opened my eyes to meet the first morning in the ordinary realm. I put my running shoes on like I always do, and ran out the door like a bullet before I changed my mind about running-I got lazy after the retreat-. While I was running, a new revelation was given to me. I no longer wanted to become a writer like Mr. Katz. I wanted to become like Rose. I wanted to be that dog. A dog that transformed a man, and by doing so, she so easily transformed many, many hearts. She didn’t even know what she did. She was just simply being who she was: A Border Collie dog.

When you track down the source of every transformation, there is an inspiration. And the source of inspiration is God. God created Rose, as He created all of us, and how wonderful is the One who creates all things for a purpose, for  His mission. Even a small creature such as a dog has a role to play in His kingdom. Even a dog glorifies the mighty God and inspires a million to fall in love. A dog heals a million human souls so that Love can be felt once again in the dead hearts. A dog wakes up a million hearts, raising them up to be alive again. And to think that a dog cannot even speak a word. The dog didn’t command “Rise up!”

So how much more mighty power has God implanted in us humans? If He did that with a dog, how much more can He accomplish through us humans? That thought blows my mind, and it almost scares me.

Tenth Avenue North sings in their song “Hallelujah”. Oh yes. Afraid it is when you hear His voice. When He is drawing you near, be very afraid. You’d better be ready. You just might witness some mighty things your mind hasn’t even seen or heard of.