I hear voices. I don’t know where they come from. They come like the wind and I have to chase them.

Writing is “a precarious form of transport when the wind, rather than the pilot, set the course” to rephrase Ian McEwan in his opening chapter of “Atonement”. Sometimes I get blown by the wind and vanish on this writing balloon ride. I never make the headline with my disappearance. But these three guys did: Saloman August Andrée(the Swedish aeronaut), Knut Fraenkel and Nils Strindberg. The name of their hydrogen balloon was örnen(“The Eagle”). It took off on July 11, 1897. 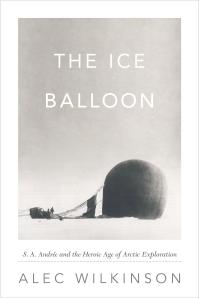 Andrée had no control over his balloon. They spent two days in the air, but due to the fog that froze parts of their transport, örnen, they abandoned their flight. They started walking back home on ice, traveling with heavy sledges packed with items, and when they returned, they received the grandest state funerals in Sweden history. It was 33 years after their balloon’s takeoff. What did they achieve? Nothing really.

What they did show was the struggle to survive. What meant the most to them at the end of their lives were recorded in their journals. One wrote love letters to his fiancée and died with a lock of her hair in his pocket. One was grieving for his mother who died before their expedition. Their humanness speaks louder than their death. Their courage to attempt to set out toward the unknown is what we remember rather than their failed trial and the tragic ending.

Was it the ambition that killed them? Or pride? When they seemed so brave and courageous, were they actually fearing dying like the regular folks, with small funerals, going unrecognized? Were they afraid of being nobody?

We would never know but we know one thing for sure. It was the wind that killed them.

The voices blow like the wind. I always end up in the abyss of the fogginess. If I go on riding like this, it could eventually freeze my brain off. I could be killed by this. This is one dangerous ride, very precarious. This is far more dangerous than being a nun. I know that. That’s why I put this off until the very last.

But what isn’t dangerous that we do here on earth? Being human is dangerous in this current state. There is only one rule to play by. You must never fear anything except God.

I know where this wind is taking me eventually. It’s just a matter of time. I know at the end of this journey, the grandest state funeral is not going to be what’s waiting for me. There will be joyful songs and welcoming voices celebrating my eternal arrival.

I have some voices to chase–

on this balloon ride of atonement that I am on.