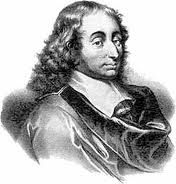 On that historical November day, Pascal was riding his carriage when the horses bolted, throwing him into the roadway.

That night, Pascal had a vision. His room was filled with flooding light. He saw Jesus, and scribbled his ecstatic joy on a parchment which he sewed inside his coat pocket as a memorial for the rest of his life.

He was 31 years old at that time. Until his death, which came rather early at still the young age of 39, he pledged his God-given talents to Christianity. He became an apologist for the fast changing times. He was the rational voice of the Truth in the skeptical Age of Reason. He was the bridge transferring the ancient doctrine to the world of the new and radical modernity. He understood the paradox fully: that only reason can persuade reason of its own inadequacy. Which might be why he kept his parchment hidden inside his coat pocket. He wrote so beautifully, his religious emotions so raw in every word he wrote:

“God of Abraham, God of Isaac, God of Jacob, not of the philosophers and scholars…Joy, joy, joy, tears of joy…’This is life eternal that they might know you, the only true God, and Jesus Christ, whom you have sent.’ Jesus Christ. Jesus Christ…May I not fall from him forever…I will not forget your word. Amen.” (source & full text)

This, he decided to keep hidden. He decided to keep it personal. The light that filled the room, the Jesus he recognized, his ecstatic feelings and emotions. I know what he must have felt, the burning fervour: the electricity running through every vein he possesses, heart-pumping fast, and the sense of awe and wonder magically coursing through his entire being. He was probably afraid if he wouldn’t cause a major hurricane on the opposite side of the world with the butterfly emotion he was feeling inside. His soul trembles, shaken by the Power, and uncontainable Love exuding all over!

He wrote none of that publicly. But why? I can’t help but wonder. Is this a male thing? Or the clear distinction of the two different ages, one being the age of reason, and the other the new age? And if Pascal was a man of this age, what would he do with the mystical experience he had?

If I were him, the whole world would know about my private encounter with the Holy Trinity. I would be going on and on about the light that filled my room, how a divinity had made a visit(three visits in one! Who does that??!!?), awakening my three beings(mind, body and soul) all at once. As a matter of fact, I did. And for the lack of my theological background, I think the words did not come out correctly. The proof of that is that my close families, my doctor and nurse suggested the following three: that I  1) raise my dosage, 2) be put on a mood-stabilizer for a limited period, 3) be hospitalized. I just couldn’t keep my mouth shut, or stop writing words. Eventually the Divinity Himself totally took over my soul in His attempt to rescue me from crossing to the other side of the river, a river of no return. He made the crazy horses bolt and stopped the carriage. But unfortunately, at that point, I was beyond gone, and so, I cannot retrieve the memory of my dramatic conversion clearly. So there. Way to silence me, God.

The carriage Pascal was riding was left hanging over a bridge above Seine River. He almost never crossed that river that day. Instead, he was thrown off from the carriage which was to hang dangerously over the river. He was retrieved from the accident without any physical harm and later that same day, experienced His revelation. God did not have to silence Him or make him blind to lead Pascal where He wants.

Pascal kept that day’s work all inside. He kept it inside his pocket. But the encounter was enough to re-prioritize his work. His brilliant scientific works took second place after the event. To this day, he is remembered as a genius mathematician, physicist, inventor, writer, but most of all, he is a Christian philosopher who was given the gift of the discerning spirit. He realized that the God of the philosophers was not the God of the Bible. And that puts him in a completely different category. He wasn’t just a philosopher. He was a prophet.